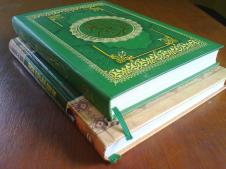 83.  And they question you (Oh Muhammad) about Dhu’l-Qarnain. Say: “I will narrate to you something about him.”

84.  “Behold, We established him (with power) in the Eart and endowed him with the ways and means (i.c. capacity) for jurneying there in order to accomplish what ever he wanted to do…”

93.  “(And he marched on) till, when he reached (a pass) between the two montainbarriers, he found before them a people who could scarcely understand anything spoken (i.c. any utterance in his language).

94.  (Eventually, when were able to communicate with each other) they said, “O Dhu’l-Qarnain! Behold, Gog and Magog are corrupting (and destroying) this land (in which we live). May we offer (to pay) you tribute on the condition that you build a barrier (saddan) between us and them (to proteck us from them)?”

95.  He answered. “That where in my Lord-God has so scuraly established me is better (than any tribute that you could offer me); hance, do but help me with (your) manpower, (and) I shall fill up a barrier between you and him!”

96.  “Bring me ingots of iron!” Then, after he had (piled up the iron and) filled the gap between the two shell-shaped montainsides, he said, “(light a fire and) ply your bellow!” At length, when he had made it (glow like) fire, he commanded: “(Now place the copper in the fire and then) bring me molten copper, whice I may pour upon it …”

97.  “And thus (the barrier was built and Gog and Magog) were unable to scale it, and neither were they able to penetrate it (by digging through it. As a consequence, mankind was safe from their attacks).”

“There is a ban a town (i.c. Jerusalem) which we destroyed (and whose people were expelled) that they (the people) can never return (to reclaim that town as their own) until Gog and Magog are released and they spread out in all directions (thus taking control of the world while establishing the Gog and Magog world-order) .”

And who are the Gog and Magog?  is this the future of the world?